Jump into the Pilot’s Seat on San Diego Real Estate 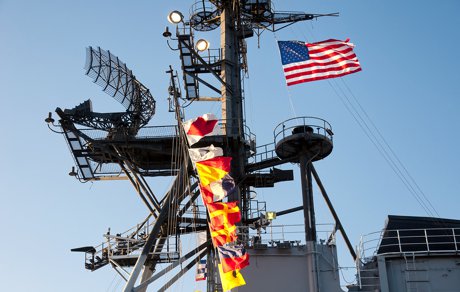 Come aboard and explore the USS Midway Museum. Located in the downtown San Diego real estate region, guests get to explore the aircraft carrier at their leisure. Proudly bearing the title as the “longest-serving aircraft carrier of the 20th century,” the ship overflows with military history.

Flight deck exhibits are awe inspiring. Imagine the action the aircraft have seen when you get up close to view bombers, helicopters and jet fighters. Feel the weight of decision making from the pilot ready rooms and the bridge. The admiral’s quarters are just below and guests can sneak a peek into these rooms as well.

Additional aircraft are found in the hanger including a fully restored F4F Wildcat fighter and SBD Dauntless Dive Bomber.  See the cramped quarters of the enlisted sailors bunks and gain a new appreciation for those who serve. Exploring a significant World War II battle, the short film “Voices of Midway” takes audiences back into the past in the Battle of Midway Theater. Delve into a “city at sea” below decks. Visit the chow line and galley and then pause a moment for reflection in the chapel. Old school technology is on display in the engineering room.

Jump straight into the action by partaking in a flight simulator experience. Featuring flight avionics and air combat, participants can launch an F/18 off the carrier or engage in exhilarating missions. Youngsters living in San Diego can join the Junior Pilot Program. An audio tour leads kids on a quest to complete activities with the end result earning them their very own pilot’s wings. Mom and dad will surely want to record this proud moment. Stop by the information booth to get them started.

A visit to the USS Midway Museum is a great way for residents from the San Diego real estate area and beyond to gain respect for men and women serving in the United States military. Hours are 10 a.m. to 5 p.m. daily and tickets can be bought in advance online.